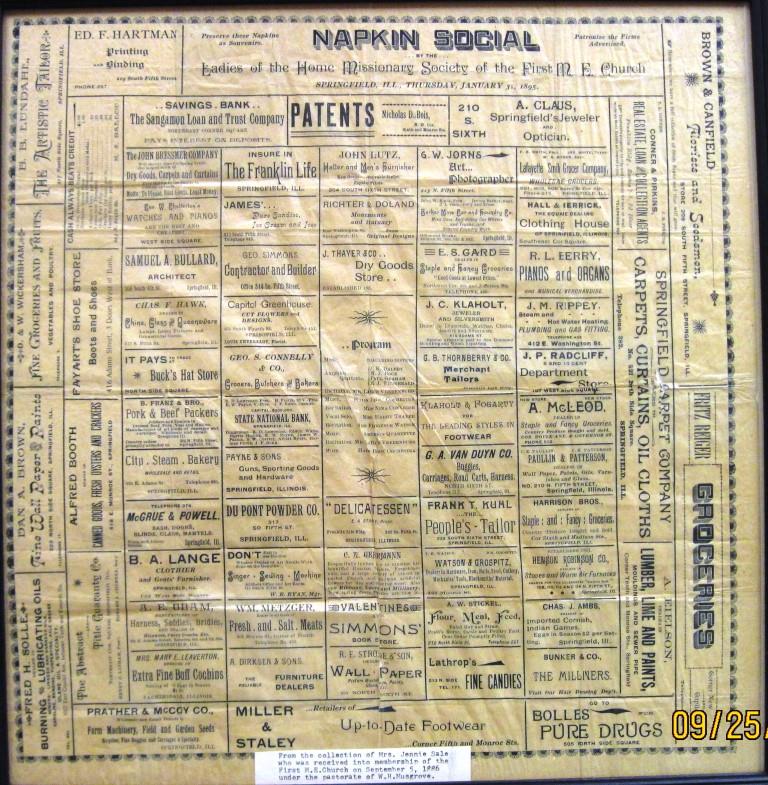 The napkin above, printed in 1895, is a rare relic of a fundraising technique that was popular among women’s church groups in the late 19th century – “napkin socials.”

The idea was that members of a group – in this case the Ladies of the Home Missionary Society of Springfield’s First Methodist Episcopal Church (now First United Methodist Church) – would solicit advertisements from local businesses to be printed on napkins. The group then would hold a social event, with entertainment and refreshments, at which the napkins would be distributed.

Of the 71 businesses that bought napkin ads, only one – the Henson Robinson Co., established in 1861 – appears to still be in operation.

The Ladies held their napkin social on Jan. 31, 1895. The Illinois State Journal published a paragraph about the event – which the paper called a “sociable” – in its “In the Social Realm” roundup the next day. Here’s what it said.

Whether or not many Ladies tried to keep their napkins as souvenirs, the napkins’ shelf life was limited, since they were made of paper.

Probably the only Lady who ultimately preserved her napkin was Nancy Jane Leaverton Sale (1850-1926), who went by the nickname “Jennie.” Jennie Sale was an active member of the Daughters of the American Revolution and, as the label at the bottom of the napkin states, she joined First Methodist in 1886. She was married to A.W. Sale, a horse and mule dealer and politician. The couple had one child, a daughter named Jessie, who died of typhoid fever at age 7.

Jennie Sale’s napkin is now under glass in the controlled environment of the archive room at First United Methodist Church, Springfield. It is not usually available for public view.

Hat tip: Thanks to Steve Beilstein, archivist for the historical council of First United Methodist Church, for bringing the napkin to our attention and for providing the photo and background information for this entry.

This entry was posted in Amusements, Churches, Women. Bookmark the permalink.